Maxwell Macleod was born on World Down Syndrome Day 2014. Now as he turns six on March 21st, his Mum Molly Macleod from Gloucestershire talks about how Maxwell is learning to communicate both in the classroom and at home.

This year’s WDSD theme is #WeDecide and Molly talks about making sure Maxwell is making choices and is given a voice.

This year Maxwell started year one, real school with real academic targets and an expectation for him to begin reading, writing and maths. I must admit this was a daunting prospect, especially for a boy who seems so little still, whose language isn’t developed enough for him to be able to fully express himself. I was worried about how his frustration at not being understood might play out and how he’d be able to ask for help with tasks he inevitably wouldn’t understand.

How do you ensure a child with a language delay is able to have their voice heard and understood, and more importantly for his choices and wishes to be upheld whenever possible? 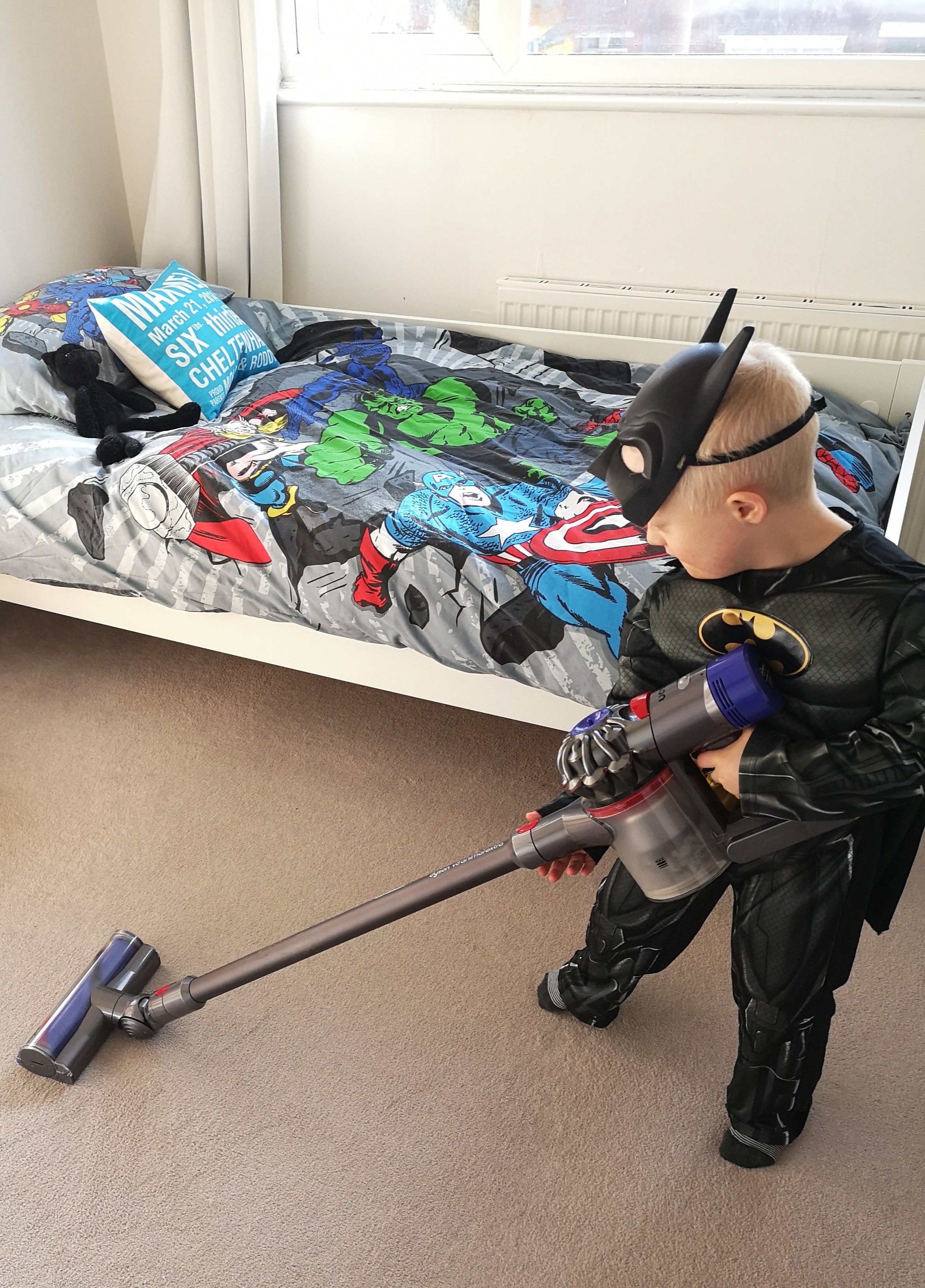 For us consistency has been key, consistency of language and the times when he is able to make an informed choice. For example, we have always encouraged him to make his own choices around food. His favourite choice being sausages and ice cream for breakfast! Some compromise has had to be learnt. Another has been around the clothes that he wears – except when it comes to school uniform, which we still battle with as he simply can’t understand why he can’t wear his Batman outfit to school every day. I long for non-uniform days…

Not that he doesn’t like school, he just wants to choose when he goes – if he’s in the middle of watching something (usually Lego related) or playing with something (usually Lego related) he quite rightly doesn’t want to put it down and get in the car to go to school. Luckily school has show and tell – every day – his poor class have already seen most of Maxwell’s toys and book collection! However, the fact that he wants to stand up in front of them and share something is a wonder in itself.

His language still isn’t clear and he mainly speaks in phrases supported with signs. He recently had a diagnosis for Verbal Dyspraxia, another label.

Actually it has been helpful, we now understand that Maxwell is trying to communicate words but his brain is sending the wrong signal to his mouth so the sounds aren’t always correct.

It’s a reminder that however enthusiastically he may want to communicate with anyone who’ll listen, we need to remember some basic rules.

The first being simplicity, we must be careful not to overload him with too many choices at once. 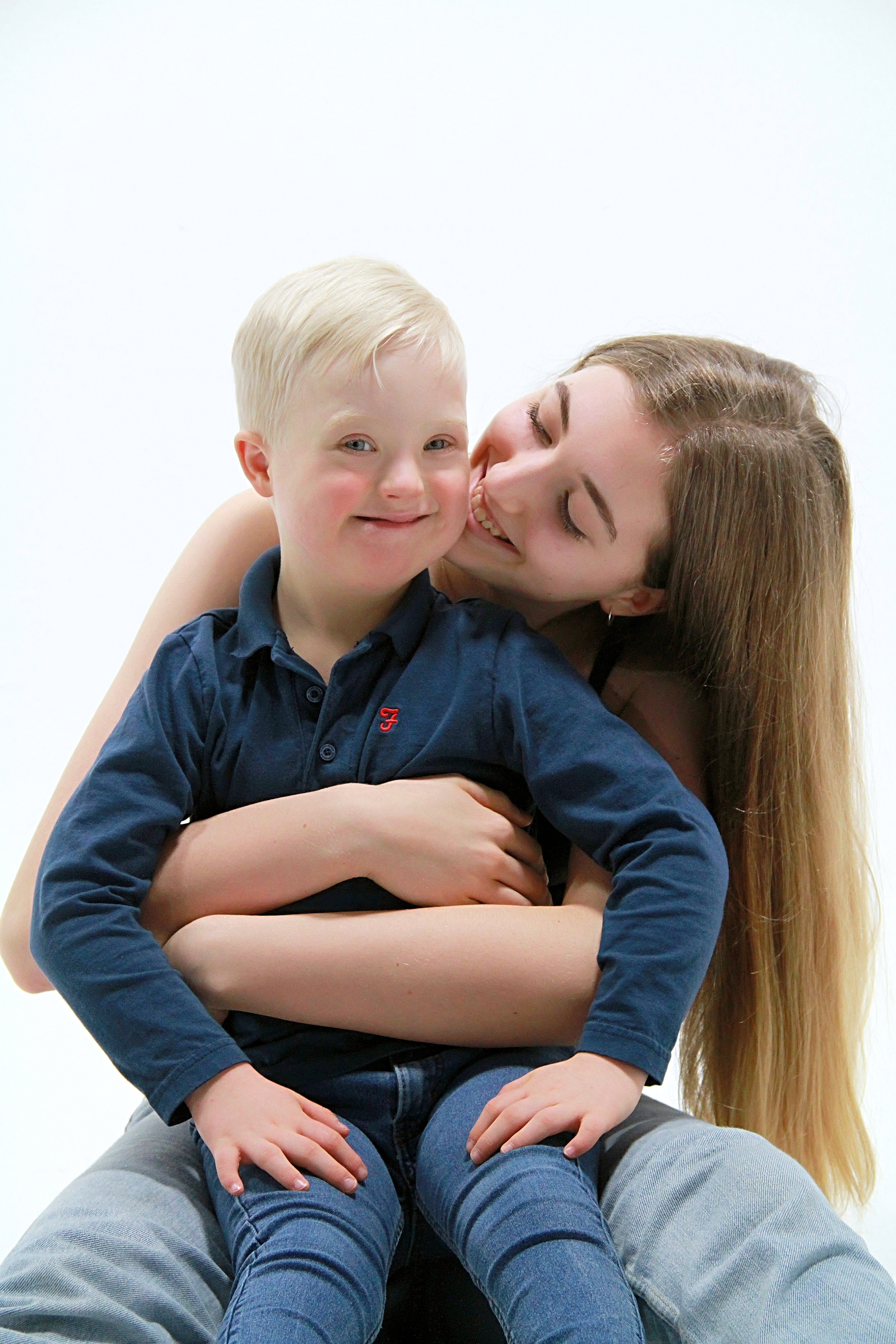 I overheard this conversation the other day which really made me laugh:

Another thing he needs is time, time to be heard and we need to remember to include him in our conversations. A while ago Ella and I were sitting talking over the dinner table and we looked round to see Maxwell with his hand in the air looking at us expectantly.

It took us both a few minutes before we realised that he’d learnt from school that you need to put your hand up and wait your turn if you have something to say!

Not that he always follows the rules at school – he doesn’t understand the need for lining up, or sitting still if he’s bored, so he can often be found in another classroom or the head teachers office, showing off pictures and babbling away about the adventures he’s been up to.

His handwriting is illegible and he cannot yet write his own name, but he can make a tower with his pens or pretend they are a sword for fighting the ‘scary dragon’.

The world of maths still eludes him but he can make a ‘delicious sandwich’ with the Numicon to share with his friends, or count up all the imaginary dogs that need to be rescued and ask us to look after them ‘carefully’. He is interpreting the world according to his needs, tempting birds with his lunch, inviting us to play super-hero’s with him; involving us all in his world and his choices.

Maxwell is starting to explore his place in the world and he understands that communication means connection. He is trying to initiate conversation, mostly about who ate who in the Minions movie or anything involving Batman. Other times he might mix it up a bit and bring in Spiderman, Ironman or Barbie, he does love Barbie. Now, when he wants to say something at teatime he will go round the table and say everyone’s name in turn before he speaks, just to make sure he has our undivided attention.

And he does love the attention; it’s all about him at the moment, in fact his favourite phrase when he sees something he wants is: ‘Me, me, me, me, me’ as he holds out is arms and indicates with his hands to please bring it here. On reflection, his most frequently used words currently include ‘Me, Mine and My’ especially ‘My Mummy’ where he insists to Ella that I belong only to him and not to her.

I love hearing Maxwell express his feelings and desires, showing us his personality through his choices and being able to feel as though his opinion matters.

Sometimes it matters above all else and he gets frustrated when he isn’t allowed what he wants when he wants it. He will demand you leave the room by pointing his finger at the door and shouting ‘Out!’ whilst stamping his foot when he doesn’t get his own way. I have no idea where that one came from, a movie probably; it’s always entertaining when he comes out with something we haven’t taught him, it’s sometimes endearing and often very funny. When he shouts this at me I have to leave the room, mostly because I’m laughing too much.

He’ll often push his luck with his requests, my favourite so far: (Maxwell putting on a sad face and looking up at me wide-eyed) ‘oh mummy, my tummy needs ice cream!’ He is also acutely aware of what may get a reaction from us and has perfected the art of fake crying. I even asked him the other day if he was fake crying, he looked at me and with a cheeky grin said ‘yes’, he then turned away and promptly stopped! How

can you resist giving him what he wants when he asks with such innocence and wonder, and how much harm can it really do if he wants to wear his fairy wings to the supermarket or eat ice-cream for breakfast? Most of the time he makes good choices; he prefers blueberries to chocolate, sausages to sweets and he loves tidying up as much as making a mess. He’s also very handy with a hoover and a duster.

He is learning how to assert his opinion with others and how to ask for what he wants. One day he’ll hopefully learn to accept that he can’t always have it is own way, but then again, if he keeps asking in his usual charming manner and with his oh so beguiling smiles and cuddles, that day may well be a way off yet…

Although verbal communication is harder for Maxwell, he has a determination to make his voice heard.  I am always thrilled to see him independently waiting patiently in line with other children with an object of his choice to share with the class during our daily ‘show and tell’ sessions. This is obviously something he enjoys doing as if he hasn’t bought something from home, he will find something in the classroom and even join the line for a second go with a different object!

This confidence also comes through during our performances to the whole school. Maxwell has had speaking roles in our Nativity performance and in our sharing assemblies to the whole school this year. He willingly stands up in front of large audiences to use his voice and say his words. I hope that this is testament to our school that all children have the right to a voice and that our children are supportive of making sure that all children have this right.

He has particularly benefitted from our ‘Talk for Writing’ stories during Year 1, joining in with the actions to tell the story and answering questions about what will happen next, to share his knowledge and understanding with the class.

Read ‘Maxwell will be one on World Down Syndrome Day’

Read ‘Maxwell turns four and what he brings to his community’