Ian Davies is a filmmaker and he is also father to Finn, Amber and Olivia.

Amber and Olivia are 10-year-old twins, and Amber has Down’s syndrome. Ian has spent the last four years documenting their journey through school. His feature-length documentary film Amber and Me is about to be released in cinemas across the country. The film follows the challenges for both girls through the first four years of school, and charts the changes in their relationship, uniquely from their own perspectives.

An important part of the story of Amber and Me is whether Amber can stay in the same class at school with Olivia or whether she should go to a school for children with special needs. It also touches on how children with learning disabilities are treated in mainstream education, and looks at inclusion, respect, understanding and of course, the close bond shared between twin sisters.

We caught up with Ian to find out more…

Ian, tell us about your family life…

There are five in our family. Mum (Marion), me, older brother Finn and Amber and Olivia who are twins and who are now 10.

What compelled you to start filming and eventually create Amber and Me?

Amber and Olivia were about to start primary school and like any parent I was curious how they would settle in with their new classmates. Quite a few children were going up from their nursery, but more than half the class would be children who were new to both girls. I think I was a bit fearful of how this would play out for Amber. We had just had a lovely summer and Amber was really happy. I had heard stories from other parents of children with Down’s syndrome about how their son/daughter was teased when they went to a new school. So, I wanted to see how she settled in and I thought I would film it and hopefully show that it’s not as bad as I might think!

And that’s pretty much how it went. Amber was happy, made friends and after the end of Reception a friend said that I should continue filming to show how she progressed through the next year. And before I knew it Amber was in Year 4!

Was it your intention all along to make a documentary?

Yes, but a short documentary. When Amber started to struggle at school, we realised that there was a new part of the story and that the film would have to be longer. This is often the way with documentaries, and what makes them really interesting and challenging to make.

The documentary is very honest and shows the struggles Amber has with school. Why do you think it is important to show this?

I think many children go through struggles at times at school whether they have Down’s syndrome or not. In general, it’s much better to acknowledge that rather than pretend that it doesn’t happen. In many cases, as well, these problems can be eased and sometimes solved by a little bit of care and understanding so the more open children and teachers are about these things, the more chance you have of helping them. Amber went through a difficult period when her Teaching Assistant (TA) was taken away from her; she was also struggling with the increased focus on learning (especially maths) and less play and a few children were being a bit mean to her. Olivia picked up on this, especially the latter and so could alert us and we could address it with school. It didn’t completely solve it, but it helped. That’s why we made the “I’m a Buddy” stickers which we give out at screenings. We all need buddies, someone that we can talk to, who can look out for us. Even though Amber and Olivia have very separate lives at school, they do look out for each other. I think we all get a lot of self-respect and validation from helping others so encouraging it in class should only help, especially at a time when some schools are very results focused.

Have you had any help along the way to support Amber at school?

We have been very fortunate to have two TAs (Amber’s key workers), who have been very supportive and willing to take additional training to help Amber at school. The school was also very open to us filming which was great. However, ensuring that a school does what a school should do is not easy and we had to fight to get the provision that Amber is supposed to get. That could be a documentary as well! But I had decided early on that the film would be only from the girls’ perspectives and in retrospect I’m really pleased we went with that.

The film also shows Amber’s beautiful relationship with her twin sister Olivia. What do you think the film tells us about siblings?

Olivia always says that Amber is just like any other sister. I really like that. We have a saying in our family that we are all individuals (from Monty Python’s Life of Brian); we are all different.

I love the girls’ bond. Siblings are often the buddies that I mentioned before. It’s not always peachy, they argue, but they are generally supportive, and Olivia learns a lot from Amber too. We all do. The learning that can be achieved from people with so called ‘disabilities’ is something that should be brought much more to the public’s attention. In some things, Amber may be ‘disabled’, and in some ways she is ‘super-abled’.

There are a few initiatives and days out which support siblings of children with special needs or a disability, and I think these are really important, there is a lot of shared experience.

What are your hopes for the documentary and who do you hope watches it?

It’s a very personal film, but I wanted it to be a discussion point about Down’s syndrome and education, care and support. We had a test screening before Christmas and quite a few people who were not part of the Down’s syndrome community really enjoyed it and said that we should think a bit broader in terms of screenings and the marketing. So now the film will be released in a few cinemas on and around World Down Syndrome Day, and we intend to make it available for schools, as well as the general public on Video on Demand later in the year.

I hope a lot of parents, prospective parents, teachers and health care professionals watch it. I think it’s quite an inspiring film for teachers and school children; to be reminded you can make a difference.

Has the rest of the family watched the film? What did they think? 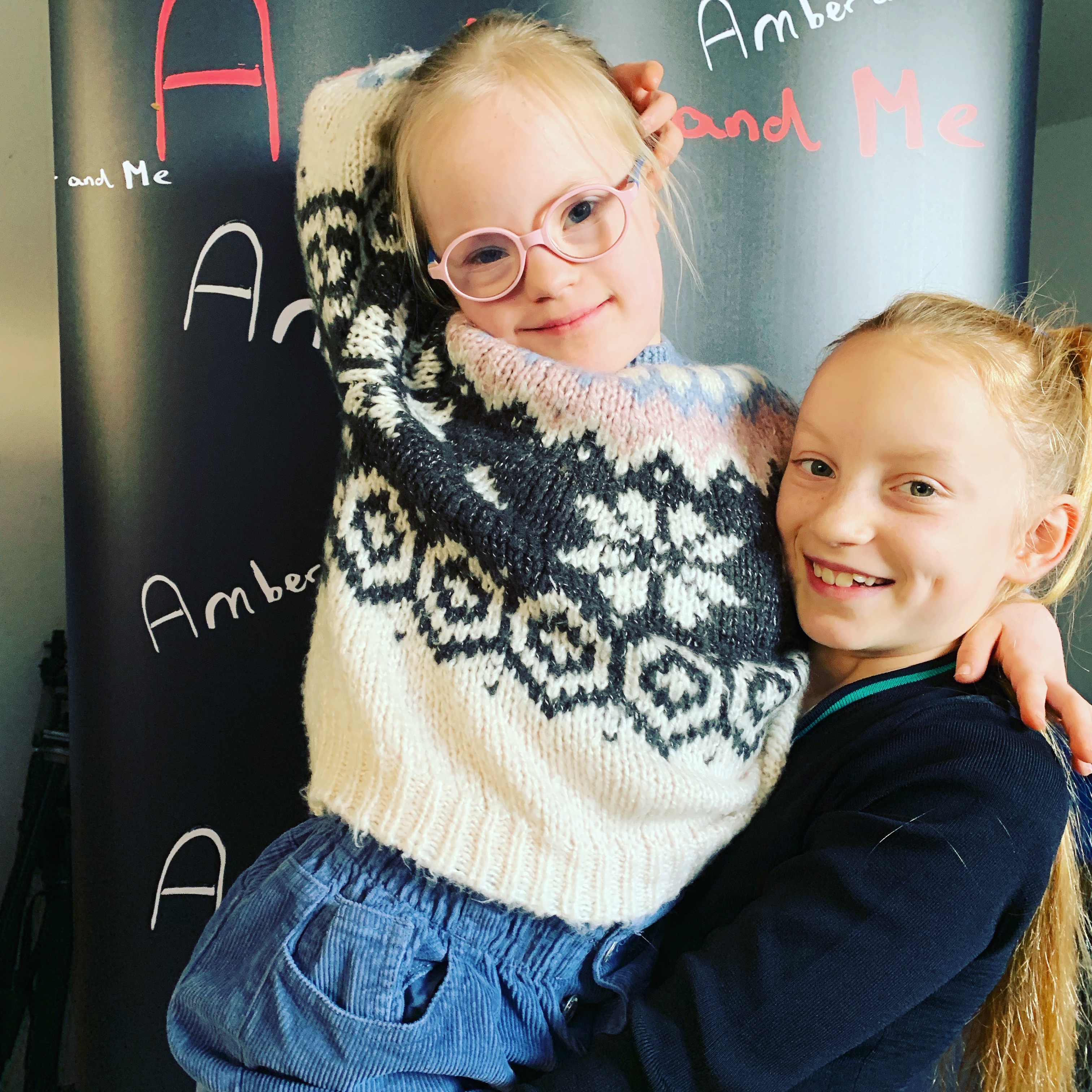 The family has seen it. I remember watching it with the girls for the first time and thinking “I really, really hope they like it”. If they didn’t, I wouldn’t have released it and would have just kept it as a family film. But they laughed quite a bit and they were very sweet afterwards and said I had done a good job! We all have our favourite lines from the film, and most days one of those lines comes up again in normal family life.

Do you think you will film more, documenting Amber as she grows up?

We are making a follow-up which is about the girls trying to put on a small variety show in a village hall which we are filming at the moment. Amber went through a stage of singing Naughty from Matilda the Musical about 50 times a day, so we promised to help her sing it on stage. Needless to say, things don’t go to plan! Hopefully the film will take less than four years and should be ready this time next year.

How is Amber getting on at school now?

Amber is now in Year 5 and is getting on well at school. The school has reinstated her previous TA, whom she loves, so she’s usually happy to go to school. We are now thinking quite hard about what to do about secondary school…

Do you think Amber will carry on at mainstream school with Olivia as she gets older?

That’s the question we’re trying to work out. It’s complicated!

Tell us about Amber. What does she love doing?

Amber loves playing, dancing, singing, and in the last six months she has decided that she quite likes reading. She is currently going through a craze of packing, which is great when we go away and not so good when we’re not!

What are your hopes for Amber’s future?

Like all parents we want her to be happy. I would like her to be able to work with her talents so she is seen for her ability rather than her disability. But mostly happy. She is generally a very happy girl and brings a lot of happiness to the family. We all adore her.

For more information about the film please click here.

Screenings of Amber and Me:

More screenings are also being added, and will be updated here.

If you would like to advise on any of the subjects covered here, our experts in the Information Team are always on hand.

Here’s a wealth of information on Education.

Here’s information on day-to-day support for children and young people, including getting support from an Education Health and Care Plan (EHCP)