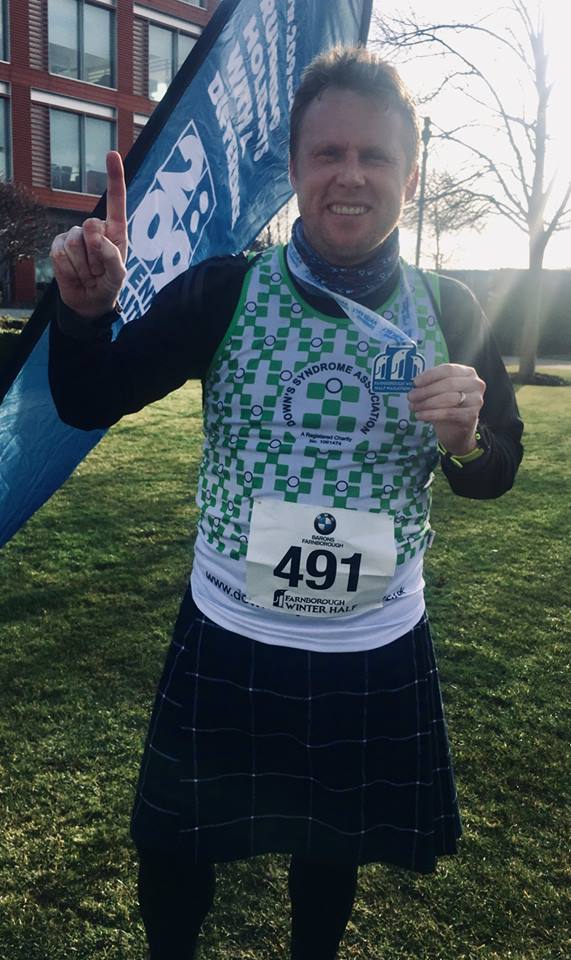 The Scotsman has just completed this gruelling challenge, raising more than £2,500 for the Down’s Syndrome Association (DSA) and Down’s Syndrome Scotland in the process.

Asked how he feels about completing the task, the 41-year old, originally from Forfar said:

“I feel a mixture of relief and satisfaction it’s all over if I’m honest!

I was really fed up with running towards the end of the challenge, but the fundraising campaign kept me going when I found it tough. The amazing sponsorship donations do make you feel proud after it though and makes you realise people really do appreciate your efforts.”

Kevin chose to raise money for the two charities because friends have children with Down’s syndrome.

“The two charities I am fundraising for are of huge help not just to my friends, but to hundreds of families and individuals in similar situations. But the charities are also not there every minute of every day. There are surely times when parents are tired and want a rest, but they can’t and they never would if the children needed them. So that’s my motivation to keep moving, if they don’t stop then I don’t see why I should!”

And he didn’t. For a whole 6 months. Kevin ran half marathons from 27 January to 7 July at various locations across the UK. He endured wind, rain snow and sun. He also encountered blisters, and lots of kilt chafing.

Asked why he decided to don a kilt he said: “The only answer I can think of is ‘why not?!’ If it was meant to be easy it wouldn’t be a challenge!”

Not all of Kevin’s training was running related too. He also had to learn how to wear the traditional Scottish attire and keep it secure whilst running.

Things Kevin said he learnt from running 12 half marathons in a kilt:

“1. Running in a kilt in the middle of South East England makes you REALLY self-conscious.

2. Pretty much every person you meet on the way have a good bit of banter with you about it or are keen to know the story behind why you are doing this. This massively reduces the self-consciousness.

3. A kilt really isn’t easy to run in! It hangs just about the knees and as such you feel it in every single step you take. It’s also hot, like really, really, really hot, mainly around the waist.

A few highlights of the whole challenge included realising how mentally strong you can be when you’re tired and want to give up, and how much the fact that you are striving to raise funds to help those less fortunate can spur you on and keep you going! The support from crowds does keep you going and helps you through the tough times.”

So would he do it again in a kilt… “I’d never say never, but I can’t say I’ll be getting back into the kilt in any rush!”

What an amazing achievement Kevin! Hats (or should we say kilts), off to you!

You can sponsor Kevin here.