Rob Hardiman, whose Uncle Shaun has Down’s syndrome, organised a 21-hour football tournament at St George’s Park (home of the FA) on 28 of September 2019 to raise money for the Down’s Syndrome Association.

24 players took part in the tournament which started at 5am. The players were then split into teams and battled it out in back-to-back tournaments, meaning no player ever rested for more than an hour at a time.

We were fortunate enough to get the opportunity to ask Rob some questions about the spectacular fundraising event; 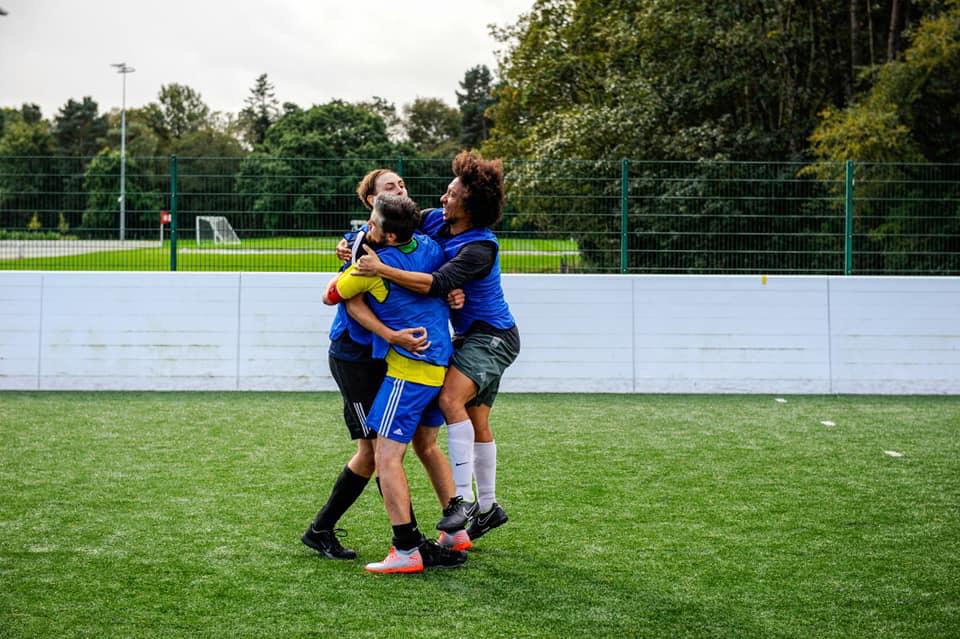 How did it feel when the final whistle was blown?

Having spent almost a year organising the event, overcoming treacherous weather conditions, no sleep and the small matter of 21 hours of football the final whistle blowing marked one of the most emotional and overwhelming feelings I’ve ever had. We had done it! A mass group of hugs and high 5’s ensued between 24 people who 21 hours previously had come together for the first time and had now achieved something as a team, that we will never ever forget.

21 hours – was it as hard on the body as you thought it might be?

One of the big talking points leading up to the event was how to pace ourselves to endure 21 hours. We knew eventually the pace would drop and the quality on display would be that of walking football, but we did not know when this would happen. In reality we went off far too quick but excitement and anticipation does this; 2am Saturday morning was our World Cup final! The first seven hours was played a good rate but our bodies where shot and at this point the pace did drop, significantly. Spectators pushed us on, and the two fantastic physios representing Ascenti Physiotherapy kept cramp at bay for as long as possible with some great but painful treatments.

The hardest bit was the relentless rain that kicked in at 8pm, the already heavy legs where now soaked through and moral was challenged. Thankfully St George’s Park, knowing the significance of the event and the prior 19 hours effort, allowed us to take the final hours indoors on to a pitch not normally reserved for general public. The final three hours where played following on the footsteps of our footballing heroes which pushed us on until the final whistle.

Did Shaun enjoy coming to watch you all play?

Having Shaun present meant the world to me as he was the inspiration behind the whole event. I wanted to share the joy I feel when I am with my Uncle Shaun and show the world that those with Down’s syndrome can expect to live successful and fulfilling lives. I further wanted to raise awareness of the great work done by the Down’s Syndrome Association who help family’s, carers and those with Down’s syndrome throughout every period of their lives. Shaun loved the event and was a natural when giving an interview to the ITV cameras, a moment he has not stopped talking about since.

How much have you raised?

A cheque was presented for £9,823.74 following the final whistle. After the much needed rest and recuperation, it was incredibly special to wake up on Sunday afternoon having then gone over the £10,000 mark, and we now sit on a remarkable £10,537.

What was the feeling on the pitch from the rest of the players?

I must admit that at times, I feared that I would waked up on Monday with no friends left having put them through this gruelling challenge. Feelings and emotions where up and down all day but moral and humour triumphed through the pain and tiredness. Since the event, now that sore legs have recovered, everyone has mentioned that the event was physically and mentally much tougher than expected but people are now starting to realise that they have achieved something very special and unique. It was joked throughout the day that it should be come and annual event!!

You can still sponsor Rob here.

Watch Rob, Shaun and the team being interviewed by ITV Central News.

A marathon 21-hour football tournament this weekend raised more than £10,000 for the Down's Syndrome Association ⚽🥅 No player had more than one hour of rest. It was organised by Rob Hardiman who was inspired by his uncle, who has the condition. The tournament lasted 21 hours because people with Down's Syndrome are born with an extra copy of chromosome 21.